Together with our Polish member NAUWC, CECOP co-hosted a national workshop on the role of education in the European Action Plan for the Social Economy.

On 1st of December 2020, the European Confederation of Industrial and Service Cooperatives (CECOP), together with its member organization, the National Auditing Union of Workers’ Cooperatives (NAUWC), organized an international online event focusing on the role of education in the European Action Plan for Social Economy. The event initially planned in September in Krakow, due to the prevailing pandemic, was transferred to the virtual world and took place online. 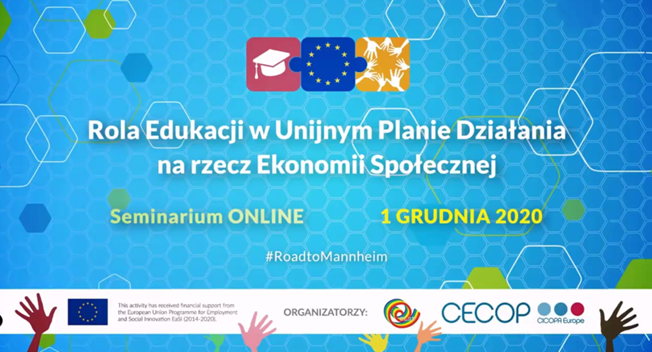 In the first part of the conference, moderated by Mila Shamku, CECOP's Advocacy Coordinator, the following speakers took the floor: NAUWC President, Mr. Janusz Paszkowski, virtually in the form of a message recorded in September, CECOP's Secretary General, Ms. Diana Dovgan, Ms. Ulla Engelmann, Head of the Unit for Clusters, Social Economy and Entrepreneurship within DG GROW in the European Commission, who introduced the ongoing works on EU Action Plan for Social Economy, Mr. Cezary Miżejewski, President of the National Auditing Union of Social Cooperatives, who presented the Polish experience in constructing the National Programme for Social Economy Development, and Ms. Anna Bulka, Head of the Education Group at KKRES, who presented the experience of the Education Working Group at the National Committee for  Social Economy Development in Poland.

In the second part of the conference, participants had the opportunity to listen to 3 practitioners from France, Spain and Poland. The first speaker was Mr. Arthur Lauvergnier, who introduced the CJS (Coopératives Jeunesse de Service) project. Designed as an informal educational and social programme, CJS teaches young people about cooperative entrepreneurship whist helping them to develop their professional skills and self-confidence. . The second speaker was Mr. Jorge de la Calle Martín, Director of International Relations at the Cooperative Group of Gredos San Diego Schools in Madrid. He presented the history of his cooperative school that was founded by teachers, who also constitute the membership of the cooperative. Both the strong tradition of worker cooperatives in Spain and the "cooperativas de enseñanza", the cooperative schools, are crucial to keep momentum for the cooperative movement in Spain, he emphasized.

The third voice of practitioners came from Ms. Joanna Duda, Professor at the Faculty of Management of the AGH University of Science and Technology, who talked about how the topic of cooperative entrepreneurship should be more present in the curriculum of students. She highlighted that cooperative entrepreneurship should not be taught separate from the teaching of other models, but as one substantial form of doing business. All business students need to know about the various forms of business models, so they are able to choose the model that fits their interests best.

During all the interventions, the participants of the meeting had the opportunity to discuss, comment and share their reflections in the public chat, and orally. In response to the issues raised during the conference and to the ongoing discussion both in the chat and live, Ms. Joanna Brzozowska-Wabik, Member of the Board of NAUWC in cooperation with Mr. Anton Möller, prepared recommendations on the presence of education in the EU Action Plan for the Social Economy. In these recommendations she indicated that in the opinion of the participants, education should become one of the priorities of the long-term strategy for the development of this sector in the European Union. It should be present in it at least in 3 dimensions - the education of the sector's staff so that entities can better achieve their economic but also social goals, educating about the social economy, but also through social economy, i.e. using the cooperative model e.g. to conduct business in the education sector. The "learning by doing" approach brings the best results. One of the most important points that should be included is an appeal to the European Union member states to eliminate legal barriers in establishing such innovative entities.

At the end of the conference, another representative of DG GROW from the European Commission, Mr. Patrick Klein, intervened and shared his reflections on how important it is for social economy, including cooperatives, to be included not only in university curricula, but at all levels of education, starting with preschool education. In his opinion, this is only possible if the stakeholders start to work together on this topic, engage together in dedicated projects and signal the need for these changes to national authorities.  Speaking about cooperation, its values and the need to promote it among the young generation, he referred to Nelson Mandela's words that "today's youth are the leaders of tomorrow" who must and want to open up to new solutions, sustainable business forms such as cooperatives.

Closing the conference, the President of CECOP, Mr. Giuseppe Guerini, congratulated the conference organizers for its indisputable success. In response to his comment, Mr. Janusz Paszkowski, NAUWC President together with Ms. Anna Bulka awarded to Mr. Guerini and Diana Dovgan the medal for the 120th anniversary of pupils' cooperatives, thanking them for their support in promoting cooperative ideas among school youth in Poland.

The conference, even though it lasted less than 3 hours, was full of substantive content and practical guidelines both for those who have only just got acquainted with the topic of cooperatives and for those who need to direct their actions and efforts towards Social Economy and cooperatives and their role in educating and shaping current and future generations in Poland. We hope that our recommendations and inspirational contributions will be remembered by the various social economy stakeholders that are interested in the topic of education in the context of Social Economy. In many countries cooperatives still a lack the tools, incentives and available knowledge on the subject.  This conference is one contribution to fill this gap. 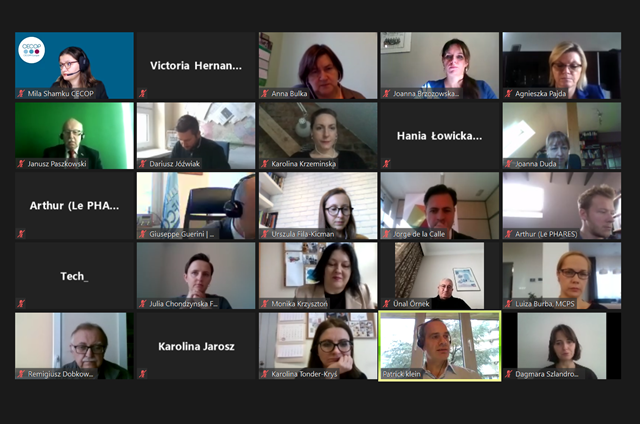