During an online event organized to celebrate the release of CECOP’s latest report "LIGHTS ON! Worker and social cooperatives tackling undeclared work", cooperators, researchers, and policy-makers discussed their efforts to fight undeclared work. 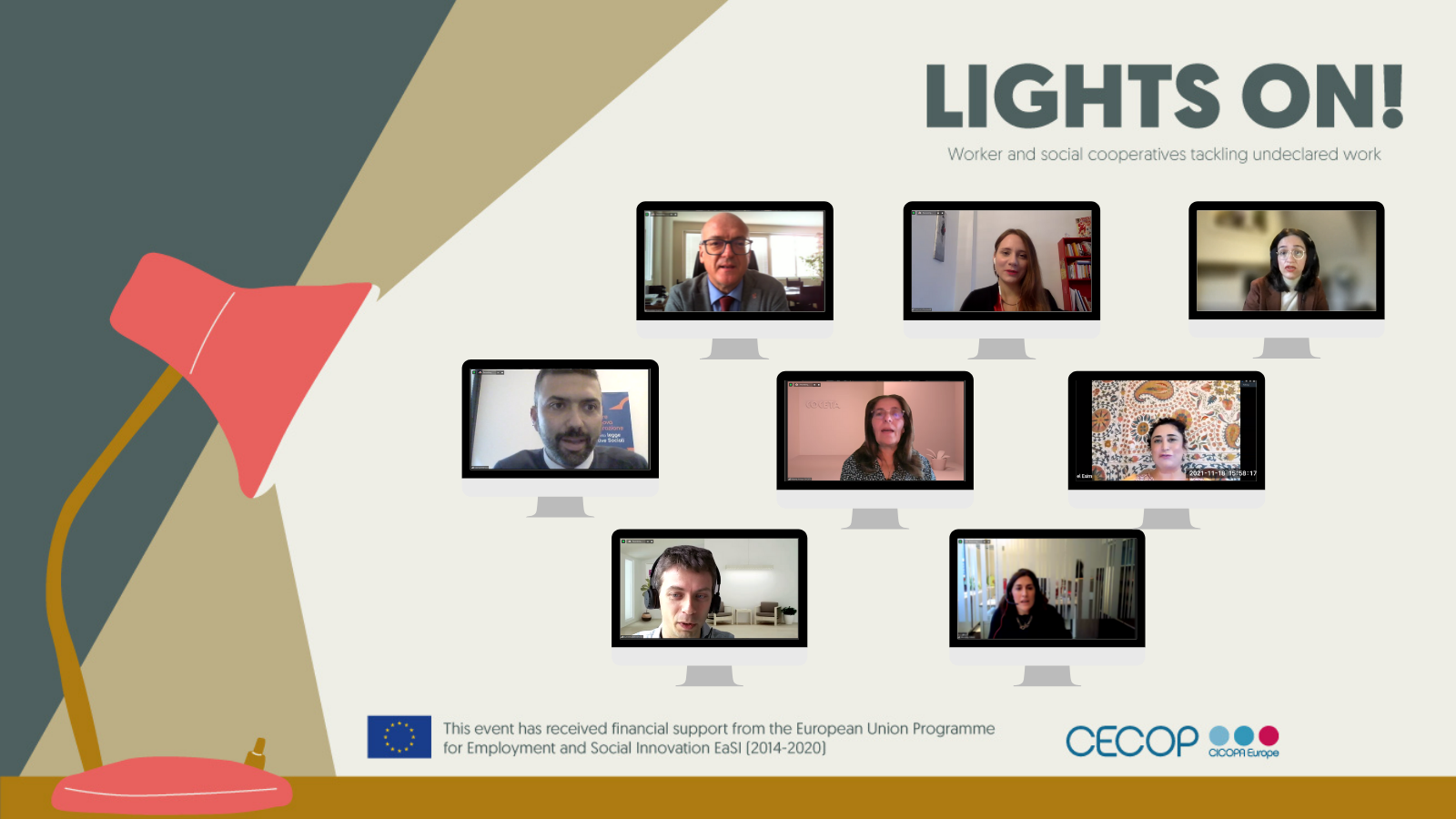 Undeclared work remains a challenge across Europe to ensure decent work, the social protection of workers, and the occupational health and safety of workers. Worker and social cooperatives across Europe have therefore developed successful models to fight undeclared work, and to uphold the rights of often vulnerable workers. With this public online event held on November 19th, CECOP “turned the lights on” the fight of worker and social cooperatives against undeclared work. The event was moderated by CECOP Secretary General, Diana Dovgan.

Presenting the report, author Dr. Francesca Martinelli highlighted that it is estimated that 16 % of the overall employment in Europe is affected by undeclared work, with adverse effects for workers and enterprises that follow the rules alike. Even though undeclared work affects more often vulnerable workers such as migrants and domestic workers, sub-contracting or self-employment can lead to higher forms of undeclared work.

Drawing on case studies of 11 cooperatives in Europe, the research showcases cooperatives that help migrant workers, refugees and asylum seekers, but also self-employed and gig workers to access formal work. Migrant workers, in particular, irregularly staying ones, are often at risk of informal work, as they have limited access to job opportunities, lack the language skills of their countries of residence, and are often reliant on informal networks. Cooperatives such Diomcoop in Spain, or Nazareth in Italy emerged to help fighting undeclared work.

As a case study from Slovenia shows, highly educated workers facing non-standard work arrangements (freelancers, platform workers) can also be at risk of undeclared work. The creation of a translation and interpretation cooperative, Soglasnik from Ljubljana, founded by young language workers, was the result of these young people reaction to the often precarious and undeclared models of work in the field.

Paloma Arroyo, Director of COCETA, the Spanish Federation of worker cooperatives, highlights that it is important for the cooperative movement to be very conscious of opening to these new digital platforms and the challenges that come with them.

During the event, Simel Esim, manager of the International Labour Offices’ Cooperatives Unit, addressed the speakers and audience with a video message. She underlined that cooperatives not only can provide employment, but also improve the bargaining positions of workers, save costs through joint services, and improve their workers incomes.

Adding a perspective from the ETUC, Mercedes Miletti, highlighted that there is a substantial lack of inspections in different fields where undeclared work is a problem. Furthermore, migrant workers, and in particular, the irregularly staying ones, are often afraid of speaking up against unfair work practices and are afraid of losing not only their income, but also their right to stay in the hosting country. Therefore, they remain at particular risk of undeclared work.

Valerio Pellirossi, Senior Policy Advisor of Confcooperative Fedesolidarità gave an intervention during which he highlighted how important established frameworks for social cooperatives are. Having a conducive environment in which the cooperatives can grow allows for the establishment of cooperatives that take on the fight against undeclared work, as several examples from Italy have shown.

The event was closed by CECOP President, Giuseppe Guerini who stated that one important element of cooperatives’ identity is their capacity to help workers find their position within society through a formally recognized and declared employment. Cooperatives also help in the formation of a worker’s identity and encourages them to speak up for their rights.

However, legal actions are needed: the 9th of December the European Commission will be presenting a proposal for the platform work directive, which can be a good starting point to fight some forms of undeclared work. At the same time, the soon to be announced Social Economy Action Plan is an opportunity to help creating supportive environments for the establishment of new cooperatives fighting undeclared work. The cooperative movement, the trade unions and the EU institutions need to work together to make a Europe without undeclared work a reality.

Watch the "LIGHTS ON" docuseries here.

Read the "LIGHTS ON" report here.