Read now the “ALL FOR ONE" campaign and conference report. Take a look at the highlights of our communication campaign, and online event on December 3rd, 2020, both dedicated to the worker-owned cooperatives' response to non-standard work challenges.

After the report was published in December 2019, we planned to invite stakeholders, policy makers and cooperatives to a public conference to discuss the findings of the study in Brussels. However, due to the ongoing COVID pandemic, this initial plan was quickly rendered impossible. But the study and its findings were too important for this event to just be cancelled. CECOP therefore decided on a pandemic-proof dissemination strategy: A communication campaign during the month of November, and a virtual conference on 3rd of December 2020.

To promote the responses of worker-owned cooperatives to non-standard work, CECOP started a social media campaign that spanned over the month of November. Representatives of CECOP, its members and cooperatives from different European countries gave testimony of their observations around the topic of non-standard and platform work, while presenting cooperative solutions to these challenges. You can find these #CECOPvoices here.

At the core of this campaign, CECOP published a series of videos, featuring the Lilith Cooperative in Finland, an interview with Francesca Martinelli of Doc Servizi Foundation, and a statement by CECOP president Giuseppe Guerini.

"Fewer and fewer companies are willing to hire their creative producers as employees, but rather assign them as contractors, which means that the workers lack most of the benefits that regular employees enjoy” Tommi Viitamies, Lilith Cooperative Finland

Tommi Viitamies, President of Lilith Coop in Finland, gives an introduction of the business model of his cooperative active in the creative sector in Finland. By offering different services to its members, such as accounting and management of intellectual property rights, Lilith allows its members to focus on their core talents. Furthermore, the cooperative helps to overcome the solitude that often comes with independent worker.

“Non-standard workers can be artists, gig workers, counsellors, artisans, translators and others. By having multiple clients and multiple contracts, they have occasional and discontinuous employment relationships” Francesca Martinelli, Centro Studi Doc Foundation

Dr Francesca Martinelli, Director of the Centro Studi Doc Foundation, highlights how many different forms non-standard work can take. From riders of online platforms to artists and personal trainers, workers in non-standard employment can have many professions. These are often dependent on digital tools for matchmaking between the client and the customer. In the field of digital economy, platform cooperatives have developed their own digital tools to ensure that this process is transparent, and that the software is owned by the workers that use it.

"The history of cooperatives is characterized by their ability to respond to the changes in the world of work" Giuseppe Guerini, President of CECOP

In the last video of the series, CECOP President Giuseppe Guerini highlighted that the adaptability of cooperatives to new challenges is one of their main strengths. In fact, the first cooperatives in Italy were formed by luggage boys in train stations. However, despite the ability to adapt to new challenges of cooperatives, legal frameworks do not adapt at the same pace. He calls policy makers across Europe to pay close attention to the responses to non-standard work and make sure that useful cooperative solutions are taken into account when drafting legislation.

On 3rd December, the online campaign concluded in a virtual conference, bringing together practitioners, researchers, and policy makers. This high-level event with the participation of the European Trade Union Institute, the European Commission and cooperators from across Europe sparked insightful contributions and constructive debates among participants.

"Improving the situation of individual workers is important. But we need collective bargaining to transform the systems that create precarious employment" Sara Lafuente, Researcher at the European Trade Union Institute

The debate was started by a keynote speech given by Sara Lafuente, Researcher at the European Trade Union institute. During her keynote, she pointed out that non-standard forms of employment are on the rise in many fields. Practices of sub-contracting workers and outsourcing of tasks within factories can be understood as non-standard work, as well as riders for delivery platforms.

This widespread use of non-standard forms of employment is a key challenge for workers and the workers’ movement alike, which needs to develop responses on different levels: Cooperatives and trade unions need to collaborate to ensure that workers in non-standard work can obtain the best access to social security whilst maintaining independence, but also to fight against illegitimate forms of non-standard employment.

"Smart helped to develop jobs that are tailored to the worker, that are fulfilling and joyful for them" Sarah de Heusch, Smart Belgium

The cooperative allows its members (freelancers) to invoice their contracts with the cooperative, which allows them to be granted employee status, and therefore receive a salary. This ensures that the independent workers have access to social security, such as unemployment benefits.

But Smart is much more than that: by providing joint services such as administration, accounting and finance tools, co-working spaces and others, members are able to focus on their core skills and develop their business. Being a member in a cooperative allows many freelance workers such as artists to tailor their job to fit their skills. With joint administration, accounting, and training opportunities, the cooperative delivers valuable services to its members who can focus on their core business. Most importantly Smart affiliates collectively own the cooperative and participate democratically in its decision-making.

"At the core of our cooperative, you find workers’ interest. You find the issues of autonomy, working conditions, of isolation and solidarity. This is vastly different from the profit interests that are at the heart of the capital-driven platform economy" Noémie de Grenier, Coopaname

Noémie de Grenier introduced the Coopaname Cooperative. Founded in 2004, Coopaname today is one of the largest Business and Employment Cooperatives (coopérative d’activité et d’emploi, CAE) in France. Recently, this model faced substantial problems, as national labour administrations failed to recognise some of these cooperatives’ role, claiming that they are not truly employers. As the workers in these cooperatives seek to combine the flexibility and autonomy of freelance work with the solidarity and access to social security that comes from their cooperative membership, the business model of CAEs is hardly captured by a simple dichotomy of employer and employee. By sitting between the chairs, legal uncertainties are a major problem for cooperatives such as Coopaname.

"The challenge of recognition of this business model is real and the role that cooperatives play in intermittent and non-standard work is often misunderstood. Workers and users need to be associated in these new kinds of cooperatives, for them to be protagonists in the cooperatives of the future." Paloma Arroyo, COCETA

The last speaker of this first panel was Paloma Arroyo Director of the Spanish Worker Cooperative Federation (COCETA) and CECOP Board Member. She highlighted that in the Spanish cooperative tradition, the autonomy of the worker has always been central. The Spanish cooperative law therefore allows for a flexible system in which each cooperative can choose if they want to fall under the general social security regimes of employees or the special social security regime of self-employed. This approach made it possible for cooperatives in Spain to react coherently to the issues raised by these new types of freelance work and self-employment, as it is the case of the business impulse cooperatives under the Andalusian law.

"My view is that cooperatives bring a different and very positive perspective on how to make most of the platform model and I hope to continue learning from your experiences." Anna Banczyk, European Commission

After these insights in different cooperative models that are reacting to non-standard employment challenges, Anna Banczyk, Deputy Head of the Employment Strategy Unit at the European Commission, took the floor. She discussed the different angles from which the European Commission is tackling the platform economy: From questions of the employment status, access to social protection and worker misclassifications. This will be tackled in the ‘Platform Work Initiative’ that the European Commission that will be presented in 2021.Several consultations with civil society actors and social partners are planned during the course of 2021. CECOP is invited to participate in Strategic Dialogues with key partners from civil society to contribute the perspective of worker-owned cooperatives on non-standard and platform work.

"Organizing in cooperatives gives greater strength to workers, it helps to mutualize needs and risks, and provides mutual aid and solidarity. But above all, it allows to redefine the identity of workers and give meaning and dignity in their work." Giuseppe Guerini, President of CECOP

CECOP President Giuseppe Guerini concluded the event by reemphasising that today’s world of work is undergoing quick and deep transformations. Worker-owned cooperatives have proven and will continue to their ability to adapt to these transitions with innovative solutions to new challenges. Work is more than a mean to make ends meet, he reminded. Cooperatives ultimately help to ensure that workers can find meaning and dignity in their work.

CECOP thanks all the speakers for their engaged presentations and 100 participants from Europe and beyond for their questions and comments.

TAKE A LOOK AT THE CAMPAIGN AND CONFERENCE ALBUM HERE 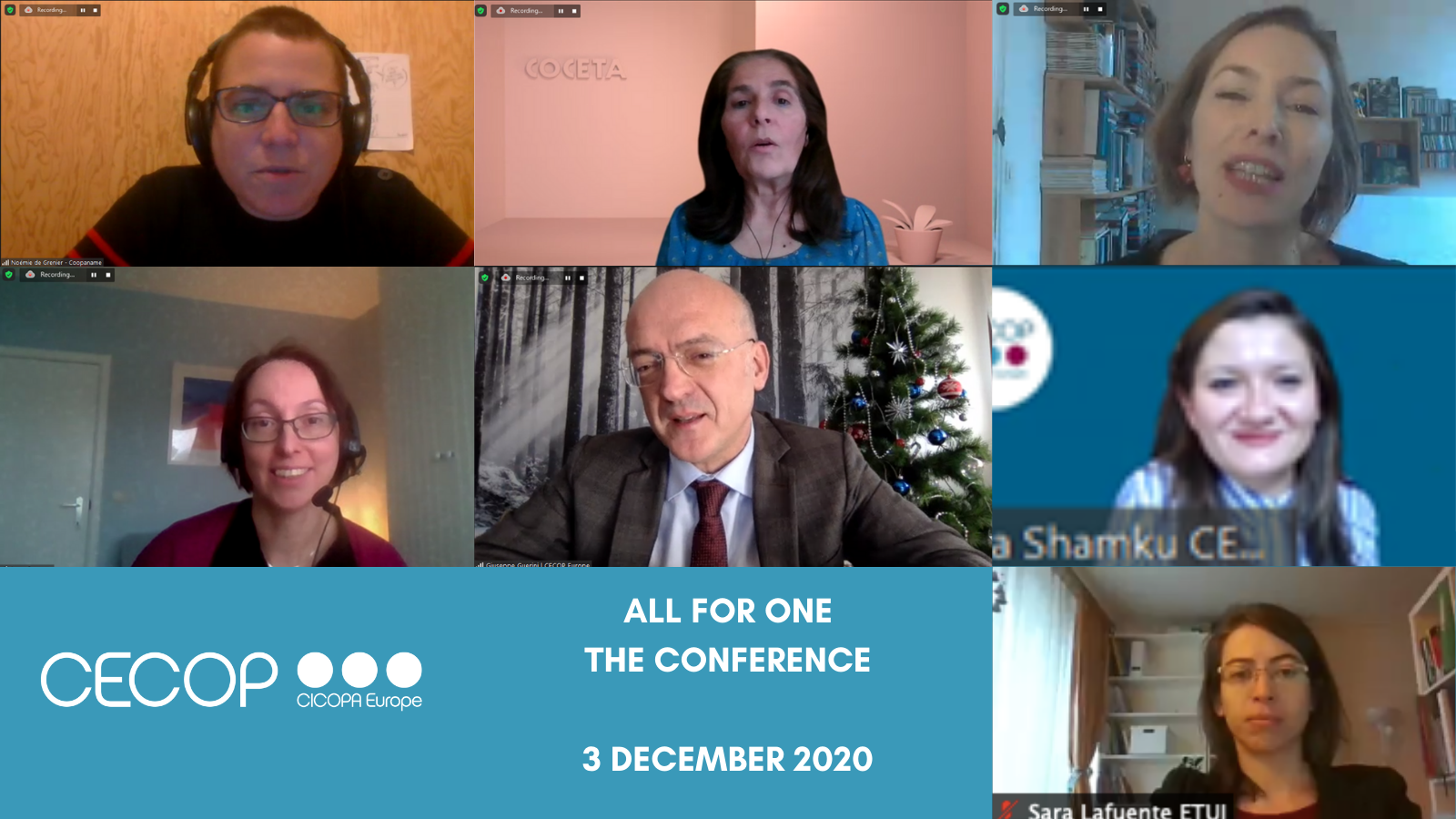