CECOP and the ETUC organized a joint event at the EP. It shared cooperatives’ and workers’ testimonies in support of an ambitious directive on improving working conditions for platform work. 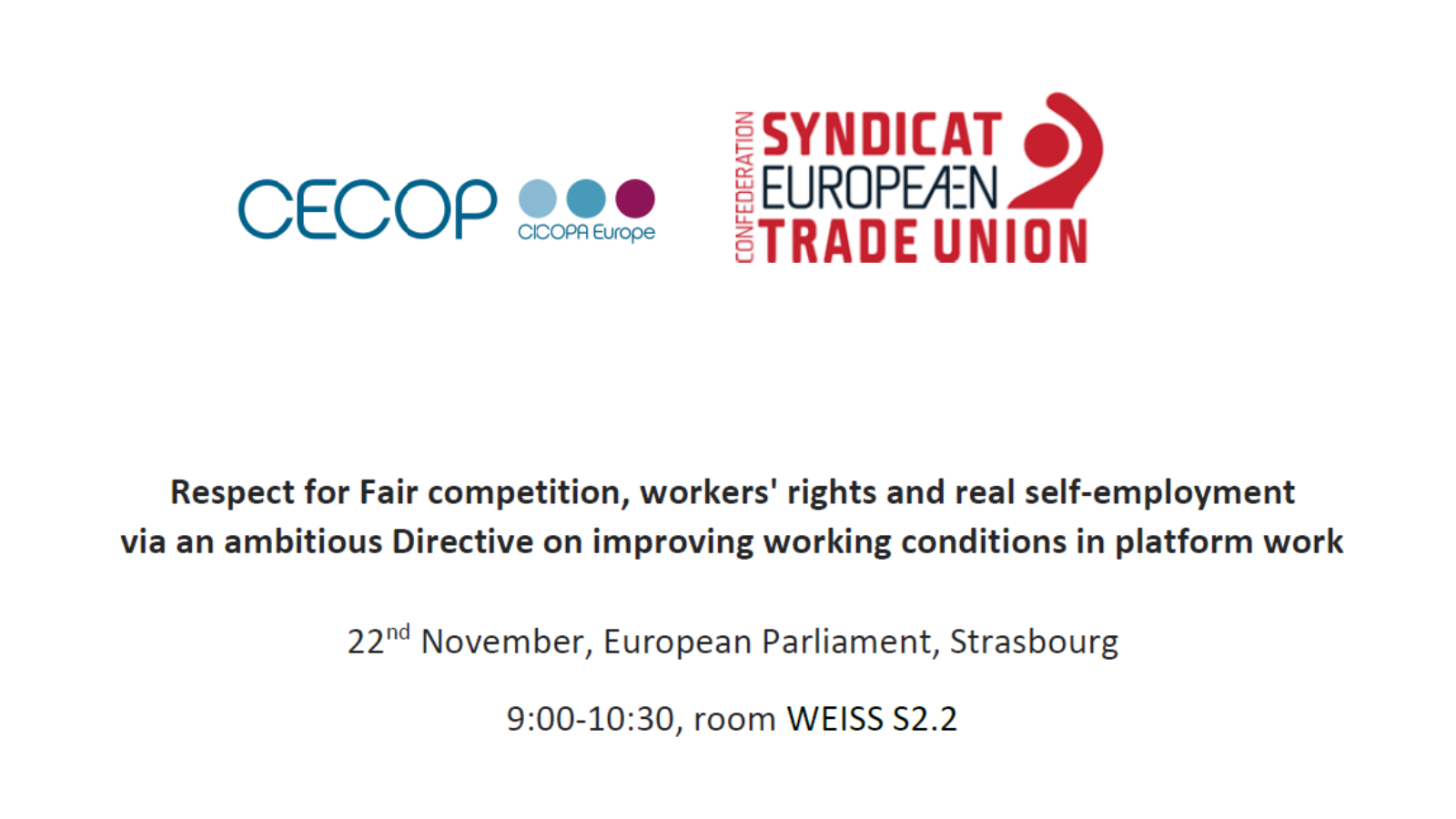 During the November plenary session of the European Parliament in Strasbourg, on November 22, the European Trade Union Confederation (ETUC) and CECOP organized a joint hearing. The event was titled “Respect for fair competition, workers' rights and real self-employment via an ambitious Directive on improving working conditions in platform work” and aimed at providing MEPs with the point of view of cooperatives, genuinely self-employed workers, and subordinated workers. At the next EMPL committee meeting, scheduled for the 12 December, a vote on the amendments to the Commission proposals to improve the working conditions of people working through digital labor platforms is planned. MEPs were also invited to share the current state of the debates on the amendments.

CECOP’s Secretary General Diana Dovgan, in her introduction speech, stated that “strong regulation of platform work is essential on the EU level and on the national level. There is an imbalance of power between the big, capitalistic digital labor platforms and the individual workers”. Correct classification of workers’ status is essential, and the rules need to apply throughout subcontracting chains. Genuine self-employment do exist, but in that case workers should not be subordinated by the platforms. Concerning the issue of algorithmic management, she added that “workers should fully understand how their work is being managed and evaluated, and they should have opportunities of redress”.  Diana Dovgan then concluded her introduction by saying that “the current debate should not appear as a fight between workers and enterprises. There are enterprises engaged in the platform work - such as platform cooperatives - which apply high social standards for their workers, which are penalized and suffer from unfair competition from platforms using the current legal void to develop monopolistic behaviors.” 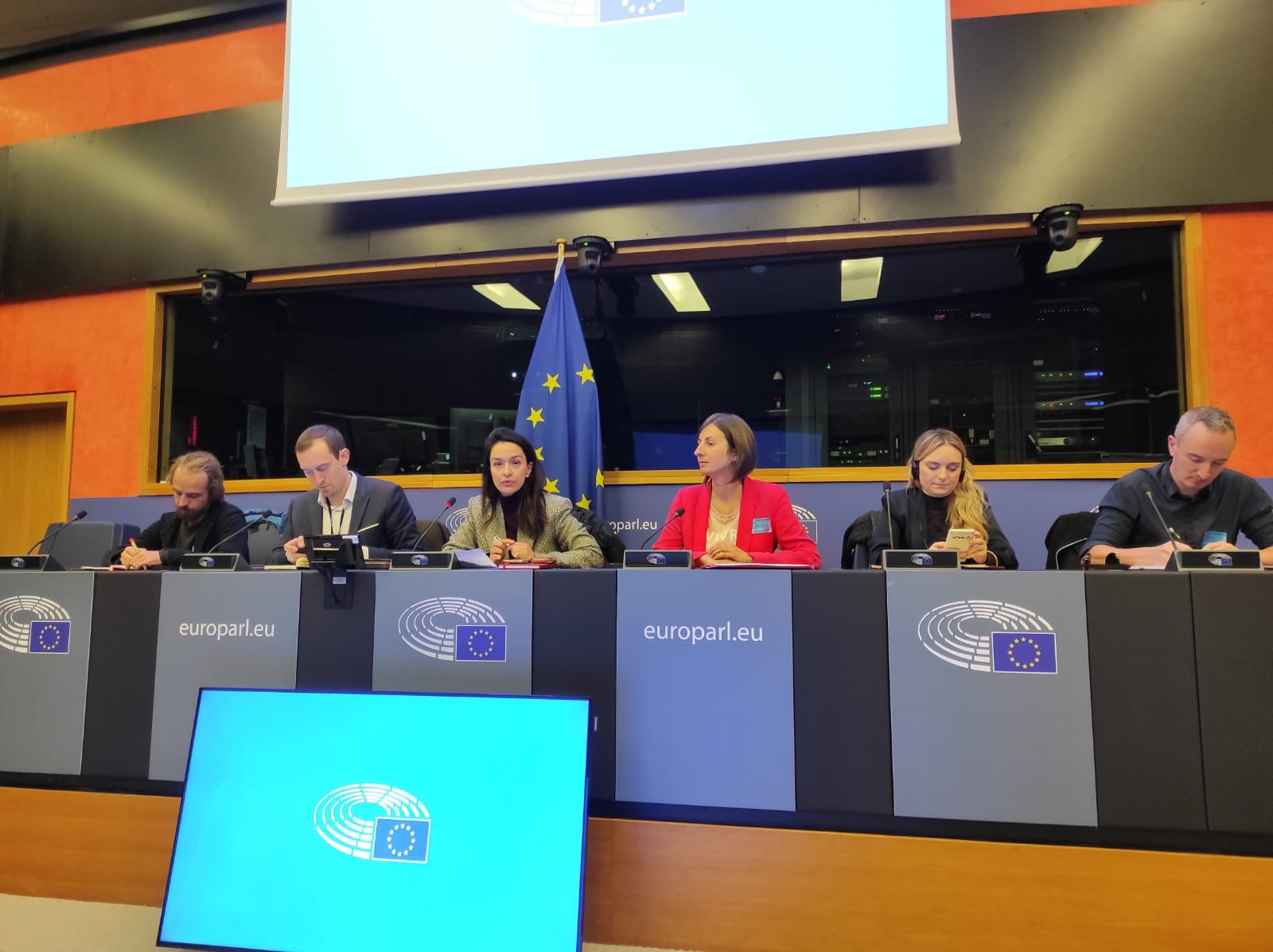 A number of contributors stressed the poor working conditions in capitalistic platforms that value profit over workers – a former employee of such a platform was forced to apply a low hourly rate and, at some point, had to schedule a medical intervention on a day off as the platform would not allow her to take a sick leave. The desire to provide dignified working conditions is also what drives a number of cooperatives engaged in the organization of platform work. One of the presenters, Belgian cycle-logistic cooperative Urbike, highlighted that alternatives to the current platform model are possible, noting that “it is not incompatible – for us to be an ambitious company and to respect our workers”.  Another cooperator, the co-founder of the drivers’ worker cooperative Coop Maze, described their desire “to innovate, to design their own rules, and reinvent solutions” to improve employees’ working conditions.

Ludovic Voet, Confederal Secretary of ETUC, concluded the event. He said “we need a strong directive with a rebuttable employment relationship (…). The self-employed workers will also be protected by a good and ambitious directive: it will stop platforms from introducing subordination upon them”.  He also highlighted the unfair nature of the competition created by the platforms because they do not respect the rules that are followed by the other actors of the economy. Finally, Voet called for the burden of proof for the status of workers to be put on the strongest actors – the companies, instead of the weak, the workers.

Both CECOP and ETUC believe that an ambitious Directive on improving working conditions in platform work will not only be good for workers but also to those companies, including cooperatives, abiding to the applicable social, labor, and fiscal legislation.